Home Latest Organic News More than 800.000 signatures against patents on plants and animals 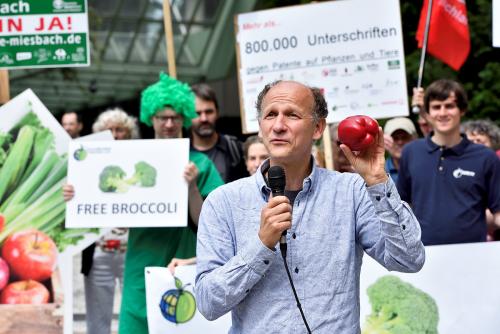 Today, more than 800.000 signatures will be handed over to the President of the Administrative Council of the European Patent Office (EPO), Mr. Jesper Kongstad, and to the chair of the Committee on Patent Law of the EPO, Mr. Sean Dennehey. The signatures were collected in European countries such as Germany, Switzerland, Austria, the Netherlands, Denmark, Sweden, Spain, Portugal and France.

The petition was organised by a broad range of civil society organisations including Campact (Germany), Arche Noah (Austria), Berne Declaration (Switzerland), Bionext (The Netherlands), WeMove (EU wide) and several organisations that are members of the international coalition of No Patents on Seeds!.

The organisations are jointly calling for a change in the EPO rules. European patent laws prohibit patents on plant and animal varieties, and on the conventional breeding of plants and animals. But at present, the European Patent Office (EPO) is undermining these prohibitions by granting more and more patents on food plants, including vegetables, their seeds and the harvested food crops.

“It is time for a change. The patent system has become unbalanced. The interests of society at large, which does not want to become dependent on huge companies such as Bayer, Monsanto and Syngenta, have to be given priority. Now is the time to stop patents on our food, seeds, plants and animals,” says Lara Dovifat for Campact, an organisation which was very successful in collecting signatures for the petition.

The Administrative Council of the EPO, which is holding its meeting today, has to make sure that patent law is applied and interpreted in the correct way. Its members are delegates from the 38 contracting states of the European Patent Convention. They have control of the so-called Implementation Regulation, which defines the rules on how to apply current European patent law. The civil society organisations are demanding that these rules are changed in order to stop further patents on plants and animals derived from conventional breeding. They are already seeing support from many member states of the EPO, as well as from the EU Commission and the EU Parliament.

“An increasing number of member states such as Austria, Czech Republic, France, Germany, Luxembourg, Poland, Portugal, Spain and The Netherlands are becoming increasingly aware of the problems that go along with seed monopolies and are unhappy with current EPO practice. Some of these countries have already changed their national patent laws or are invalidating these patents. There is strong support from the EU Parliament and also some movement within the EU Commission. However, legal certainty will only be achieved if the rules and regulations at the EPO are corrected in a way that strengthens the current prohibitions to stop patents on plants and animals derived from conventional breeding,” says Maaike Raaijmakers, for Bionext, who represents the Dutch organic sector.