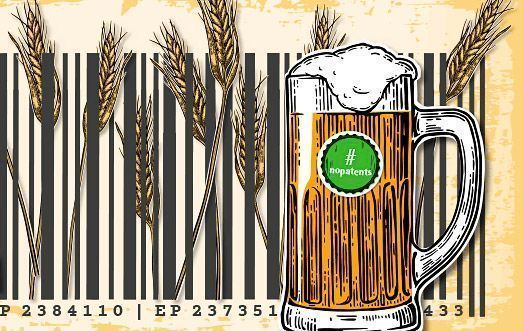 Currently, more and more patents are being filed in Europe on the conventional breeding of plants and animals, despite EU institutions having declared that this is something they want to stop. Unless political decision-makers take action, many of them have a good chance of being granted by the European Patent Office (EPO).

“We are seeing companies such as Monsanto, Bayer, DuPont, Dow AgroSciences and Syngenta file more and more applications on conventional plant breeding in Europe. These companies are not simply wasting their time and money – they have an expectation that these patents will be granted”, says Ruth Tippe, researcher for No Patents on Seeds!

The companies that filed the highest number of patent applications on plants in 2016, were DuPont (38 applications), Monsanto (22), Dow AgroSciences (16), Bayer (14) and Syngenta (7). The way in which recent patent applications are phrased can have far reaching consequences: Companies are increasingly submitting patent applications for interesting genetic information or characteristics they have, for example, identified by screening the genomes of plants. If these patents are granted, they cover all the plants and subsequent generations of plants with the same characteristics, regardless of how they were bred.

The patents on wheat, flour and food derived thereof are amongst these patent applications. They were filed by Arcadia BioSciences, a US company that collaborates closely with companies such as Dow AgroSciences. The companies claim that random mutations and natural variations in the genome of wheat plants are their invention. These traits are supposed to prolong the shelf-life of products such as grains, flours and bread; and they become inventions belonging to the companies. Arcadia claims all relevant mutations and genetic variations in wheat plants, and all wheat plants with the relevant characteristics as well as all food products derived thereof. The company has a good chance of the patent being granted. In 2016, the EPO granted very similar patents to the brewing companies Carlsberg and Heineken, which are based on random mutations in barley and also cover the process of brewing and all beverages derived thereof.

“The patents granted to Carlsberg and Heineken are increasingly becoming important precedents. Only if political action is taken to stop similar patents being granted in future, will most of the filed applications be rejected“, says Christoph Then, for No Patents on Seeds!. “Unless this happens, we will continue to see the sellout of our basic food resources being actively supported by the EPO.”

Indeed, as No Patents on Seeds! discovered, examiners at the EPO have already started to advise industry on how to phrase their patent applications to gain further monopolies on food plants in future.

No Patents on Seeds! is demanding that the contracting states of the EPO set a course to effectively stop patents on conventional plant and animal breeding at their next meeting in June. A technical paper with proposed changes in current interpretation in patent law has already been sent to the Patent Law Committee, which will meet at the end of April to discuss possible solutions. At the meeting, industry and the lobby organisations for patent lawyers will be present as observers, therefore No Patents on Seeds! is also requesting access.

Source: No Patents on Beer – www.no-patents-on-beer.org