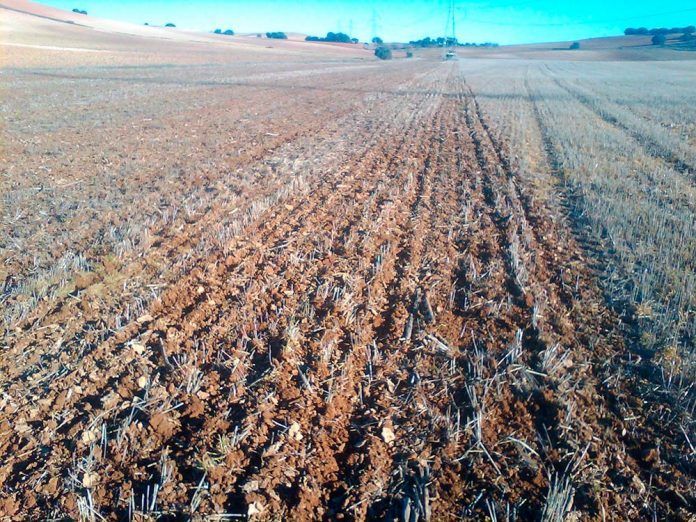 Ploughless tillage can reduce soil erosion and contribute to protecting the climate. Two recent publications by the Research Institute of Organic Agriculture (FiBL) on reduced tillage support this thesis.

(Frick, 21 June 2017) Positive effects on soil and climate can ensue when an organic farmer stops working with a plough. A FiBL trial gained these insights in clayey soils in Frick, Switzerland. Over the course of 13 years, about 8 % more humus formed in the soils tilled with a cultivator and skim plough compared to soil cultivation with a plough. In other words, reduced tillage sequestrates 2.3 tonnes of CO2 equivalents per ha more in a year than cultivation with a plough.

A plough mixes humus about 20 cm deep into the topsoil. In a reduced tillage system, however, more humus builds up in the topmost 10 cm. Below that threshold, the humus content remains stable or decreases. Thus, the distribution of humus in a reduced tillage system is closer to a meadow than a field. This can prevent soil erosion and increase the presence and variety of microorganisms like bacteria and fungi.

Neither one of the examined crops grass-clover and winter wheat showed a difference in nitrous oxide emitted from the two systems. Methane emissions are at the same low level. However, the weather conditions have a huge influence. Tilling wet soils, whether performed with a plough or a cultivator, is not only ill advised for reasons of soil protection, but also due to the high nitrous oxide emissions.

Information on reduced tillage: For farmers – For researchers

Fausto Jori: «Organic is something much more than a business»

BIOFACH and VIVANESS 2023: The future of trade fairs is hybrid

Organic cocoa, the “food of gods”