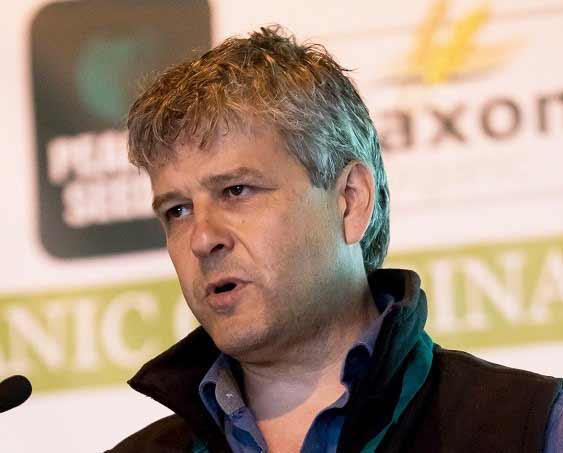 The Climate Change, Environment and Rural Affairs Committee of the Welsh Assembly Government have been taking evidence that will inform their consideration of the Legislative Consent Memorandum (LCM) on the UK Agriculture Bill. Organic Farmers & Growers CIC were invited to submit evidence and our chief executive, Roger Kerr was in Cardiff on 26 February 2020 to speak to the committee. This is an excerpt from that evidence.

The United States is the leading market of £34 billion, followed by Germany (£8.5 billion), France (£6.7 billion), and China (£6.5 billion). In 2017, many major markets continued to show double-digit growth rates, and the French organic market grew by 18%. The Swiss spent the most on organic food (288 Euros per capita in 2017). Denmark had the highest organic market share (13.3% of the total food market) (FiBL).

While opportunities exist across the globe it is important to recognise that the EU still represents our most significant export market with around 60% of food, feed and rinks exports destined for the EU.

With regard to future trade arrangements the ideal scenario would be that the current organic trade arrangements are maintained via bilateral mutual recognition (equivalency) agreements between the UK and the EU, the US and other third countries (South Korea, Chile, Switzerland, etc) respectively.

On the 1st January 2021 the EU will implement a new organic regulation (848/2018) however the final implementing and delegating acts have yet to be published so we (OF&G) don’t have a final document identifying the changes yet. We have looked at the differences but until it is all settled, we cannot confirm the position.

The new organic regulation (848/2018) however does require that third countries have to be recognised under a trade agreement as having a system of production meeting the same objectives and principles by applying rules which ensure the same level of assurance of conformity as those of the Union.

In other words, 848/2018 precludes bilateral mutual recognition agreements and requires that third countries are compliant (not equivalent) with the EU regulation via a trade agreement. All current third country equivalency arrangements will expire on 31st December 2025.

If a bilateral mutual recognition agreement with the EU is not possible then UK Organic Control Bodies’ will need to apply for recognition as equivalent to the EU COM under Annex IV of 1235/2008 in which case pretty much the whole UK supply chain will need to be certified to 848/2018 to allow export to the EU. In this scenario we could well find ourselves with a UK organic standard (Defra have indicated they will not accept 848/2018 preferring to take the best of the existing EU regulation and EU Reg 848 plus some UK specific elements) plus the new EU organic standard (effectively a private standard in the UK) and any additional requirements from third country equivalencies (like antibiotic free milk required with the US/UK equivalency agreement).

Defra has said from the outset that they will accept organic imports from third countries but what that actually looks like we have still to see. We assume they will not just accept anything from anywhere on the basis that the documentation says its ‘organic’ so this needs to be confirmed and there is of course the thorny issue of tariffs.

There is as a consequence various implications to the Welsh operators:

Following the implementation of 848/2018 within the EU this will be followed undoubtedly by a period of consolidation which will require numerous changes to the regulation as written. The EU will also enter into trade discussions as the current EU/US equivalency arrangements will need to be negotiated as a consequence of this legislation. Alongside this, the UK will be developing our own organic standards and regulatory framework requirements. All this will mean that the organic standards and regulatory environment will remain very fluid in the coming years.

With regard to Trade within the Agriculture Bill there is a focus on Section 36, clause 6 (c) in relation to organic imports. While the Bill states in clause 6 (b) that “imported organic products are produced in an overseas country which is recognised in accordance with the regulations as controlling or enforcing standards relating to organic products equivalent to those applicable in the United Kingdom;” It then goes on to state in Clause (c) that “imported organic products comply with conditions specified in an international trade agreement.” The implication of this is that depending on the terms of a trade agreement organic products may enter the UK at a standard that financially disadvantage UK operators or undermines consumer confidence.

To ensure that UK organic regulations remain fit for purpose by maintaining trade flow, ensuring domestic and export market growth and ‘public good’ potential is realised, as foreseen in the Agriculture Bill, any trade agreement:

Areas of concerns include:

Consequently, the UK organic sector proposes that any organic mutual recognition arrangements with third countries are separated from broader trade negotiations. This would allow subsequent changes within respective legal standards and regulatory requirements to be addressed in a timely way and independent of any wider trade agreement (with the consequential challenges this would create for the organic sector).

OF&G believes government policy must focus on ‘land sharing’ rather than ‘land sparing’ as a solution to our future agricultural production needs. Organic is a ‘system-based’ approach providing many linked benefits – it enables ecosystem functionality within the constraints imposed by planetary boundaries. This is not reflected in the Agriculture Bill, we think that this will inevitably limit the scope for enabling a transition to carbon Net Zero.

Land sharing comprises the integration of agricultural production with more environmentally friendly techniques, bringing nature into the field rather than displacing it somewhere else. Agroecological and organic farming techniques, and interrelated activities across the food supply network, seek to provide food while simultaneously delivering multiple environmental benefits.

Stacking a diverse range of benefits within a complex systems-based approach in this way is proven to be far more resilient in the face of both climatic and economic shocks.

None of this however can be achieved without consideration of our diet. Wales is renowned for the quality of its red meat. However, the importance of healthy and sustainable eating patterns, with only moderate amounts of meat and dairy, is increasingly being recognised in national dietary guidelines, including the UK’s EatWell Guide.

In the UK meat consumption is more than twice the global average, if this high consumption continues, it is likely that much of the meat and livestock products (both ruminant and non-ruminant), will be imported from lower cost countries, with poor environmental and animal welfare conditions. At the same time it will result in the off-shoring of the environmental impact (including GHG emissions, biodiversity loss and pollution).

It is critical therefore that that there is recognition of the benefits and value of extensive red meat production. A transition to less and better meat and dairy will bring a host of benefits from reducing greenhouse gas emissions, freeing up land to support biodiversity and carbon sequestration, improve animal welfare and reduce antibiotic use.

It is interesting to consider what “better” means in this context but some suggest it means choosing meat and dairy from well-managed production systems that enable natural behaviour, support good health and have a diet based around local food sources and home-grown feedstuffs, using for example European native legumes and also by choosing meat and dairy from smaller-scale, higher standard domestic producers. Choosing meat and dairy with a known provenance can reconnect producers and their customers such as through farm shops, box schemes, farmers markets and independent bakers, butchers and grocers.

Currently, there is no label that delivers neatly across all the requirements outlined for meat and dairy principles, although organic comes closest.