Quinoa (Chenopodium quinoa) is a grain crop originally cultivated in the Andes, especially in Bolivia and Peru. Although it is technically a seed, quinoa is known and classified as a cereal or pseudocereal. Considered a superfood for its high nutritional value and its exceptional balance of proteins, fats and carbohydrates, quinoa stands out for its growing presence in the international organic market. 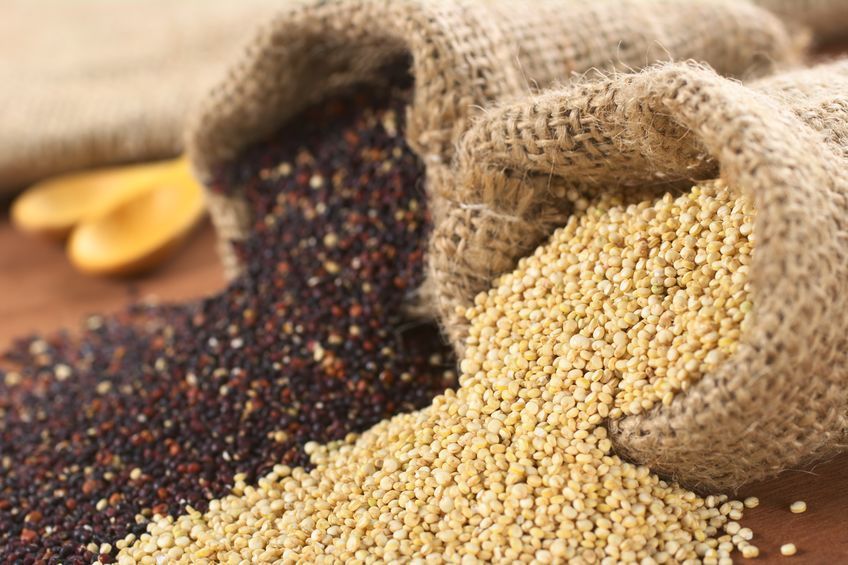 Quinoa is known for its nutritional characteristics and its many healthy benefits. With an average protein of 16%, quinoa grain has a much higher nutritional rate than any other cereal grain. It is also a great source of omega 6, omega 3 and fiber. And besides being healthy, it is gluten-free. So it is suitable for any type of diet.

Despite being an ancient crop, quinoa exports to Western countries did not begin until the 1970s. Since then, its production and consumption have not stopped growing, becoming one of the most popular superfoods today. In fact, since it is considered a superfood, its demand has not stopped growing on a global scale.

In general terms, the international market value of quinoa was estimated to be US$ 61 billion in 2016 and a very encouraging growth is expected throughout the decade. A Reports and Data recent study forecasts an annual growth of almost 12.9% in the value of grain, reaching approximately US$ 149,3 billion by 2026.

South America leads world production. Specifically, Bolivia and Peru account for 90% of quinoa production, with 55% and 43% of world market supply, respectively. They are followed by Ecuador, Chile, Colombia and the United States. According to 2018 FAOSTAT data, Peru ranks as the largest producer (86,011 tons), followed by Bolivia (70,763) and Ecuador (2,146). In fact, these regions already have 172,000 hectares of arable land devoted to quinoa production.

In terms of imports, the United States is the world’s largest importer (with 53% of imports), followed by Canada (15%), France (8%), the Netherlands (4%), Germany (4%) and Australia (3%). Likewise, the demand for organic quinoa is higher compared to non-organic quinoa.

The quinoa organic market is reaching maturity. Although an intensive farming system has settled in recent decades, much of the quinoa produced in the Andean countries is grown under organic production systems. According to a Global Food Security study, around 30-40% of quinoa produced in Peru, Bolivia and Ecuador is certified organic.

FiBL‘s latest report The world of organic agriculture (2021) notes that in 2019, organic cereals accounted 0.3% of the total cereal production area in Latin America and 3% of the world’s organic cereal area. The key cereal was quinoa (over 117,000 hectares), representing 66% of all the quinoa grown in the region and close to 100% of the world’s organic quinoa area. Whereas Peru is the country with the largest conventional exports, Bolivia exports most organic quinoa, with an organic area over 106,000 hectares.

However, the organic production of quinoa is still a challenge in the new producing countries, where weeds pests and diseases still have not yet been solved without chemical pesticides and phytosanitary products. Therefore, the Andean region continues to maintain its leading position in the global organic market.

In terms of consumption, the pandemic generated by Covid-19 has not slowed down the demand for organic quinoa. In fact, it has grown especially in Europe and North America, in part, motivated by the growing concern for healthy habits and the trend to consume healthier and more nutritious products.

Bolivia exports most organic quinoa, with an organic area over 106,000 hectares

2013: The International Year of Quinoa

Even though it is an ancient product, quinoa was practically unknown until 2013, when it began to gain international recognition. The Food and Agriculture Organization of the United Nations (FAO) declared that year as the International Year of Quinoa with the aim of carrying out development programs for the pseudocereal.

This led to an exponential growth in production worldwide. Although previously it was only grown in 6 Latin American countries, in recent decades the production of quinoa (in all its varieties) is present in the fields of more than 120 countries around the world. Its ability to grow in arid areas, with small amounts of water, and saline soils accompanies its good evolution in the market.

At more than 3,600 meters high and in an extreme climate conditions such as droughts and intense frosts only one crop persists: the royal quinoa. This exclusive variety from the Uyuni salt flats is recognized for its exceptional quality. It differs from other varieties due to its superior diameter and its flavor power, highly demanded in the international market.

Quinua Real, a leading brand on the European organic market

Quinua Real brings this variety to the European organic market. Born in 2011, Quinua real promotes fair trade farming in Bolivia, with traditional and sustainable farming methods that take care of our planet. They currently export to 35 countries around the world.

Its range of products its made with organic Bolivian royal quinoa, and most of its packaging is plastic-free. Its quinoa is produced manually, without chemical agents, so it depends on the inclement weather.

All Quinua Real products make up an extensive catalog, with different formats to choose from grain, vegetable drinks or pasta, all of them certified organic, vegan, gluten-free and with environmentally friendly packaging.

The Quinua Real products are made of real Bolivian quinoa from an associative system of village-associations. All the exporting profits obtained from this pseudocereal are lead to the royal quinoa fields and to improving the farmers and inhabitants living conditions of the region.