Home Latest Organic News Monsanto on trial for Crimes Against Human Health and Envirnment in the... 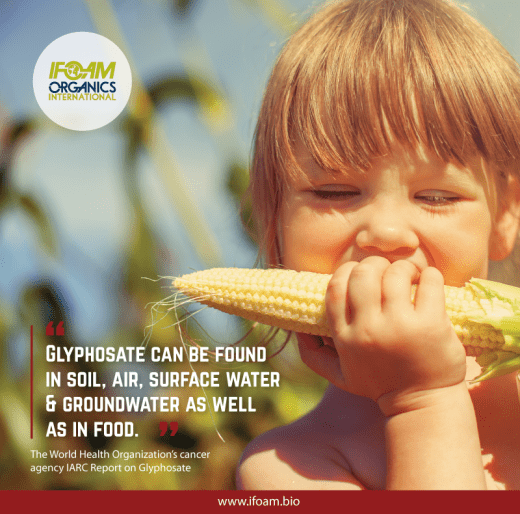 IFOAM – Organics International, the Organic Consumers Association (OCA), Navdanya, Regeneration International (RI) and Millions Against Monsanto have been joined by dozens of global food, farming and environmental justice groups to put Monsanto on trial for crimes against nature and humanity, and ecocide, October 15-16, 2016, The Hague, Netherlands.

Image: Monsanto has developed a number of highly toxic products such as Roundup, of which Glyphosate is a key ingredient.

Since the beginning of the twentieth century, Monsanto has developed a steady stream of highly toxic products, which have permanently damaged the environment and caused illness or death to thousands of people. These products include RoundUp, of which Glyphosate is a primary ingredient. Roundup is the most widely used herbicide in the world, and the source of the greatest health and environmental scandal in modern history. This toxic herbicide, designated a probable human carcinogen by the World Health Organization, is used in combination with genetically modified (GM) RoundUp Ready seeds in large-scale monocultures, primarily to produce soybeans, maize and rapeseed for animal feed and biofuels.

Relying on the “Guiding Principles on Business and Human Rights” adopted by the UN in 2011, an international court of lawyers and judges will assess the potential criminal liability of Monsanto for damages inflicted on human health and the environment. The court will also rely on the Rome Statute that created the International Criminal Court in The Hague in 2002, and it will consider whether to reform international criminal law to include crimes against the environment, or ecocide, as a prosecutable criminal offense. The International Criminal Court, established in 2002 in The Hague, has determined that prosecuting ecocide as a criminal offense is the only way to guarantee the rights of humans to a healthy environment and the right of nature to be protected.

Andre Leu, president of IFOAM – Organics International comments “Monsanto is able to ignore the human and environmental damage caused by its products, and maintain its devastating activities through a strategy of systemic concealment: by lobbying regulatory agencies and governments, by resorting to lying and corruption, by financing fraudulent scientific studies, by pressuring independent scientists, and by manipulating the press and media. Monsanto’s history reads like a text-book case of impunity, benefiting transnational corporations and their executives, whose activities contribute to climate and biosphere crises and threaten the safety of the planet.”

According to Ronnie Cummins, international director of the OCA (US) and Via Organica (Mexico), and member of the RI Steering Committee, “The time is long overdue for a global citizens’ tribunal to put Monsanto on trial for crimes against humanity and the environment. Corporate agribusiness, industrial forestry, the garbage and sewage industry and agricultural biotechnology have literally killed the climate-stabilizing, carbon-sink capacity of the Earth’s living soil.”

Vandana Shiva, physicist, author, activist and founder of Navdanya, and member of the RI Steering Committee said: “Monsanto has pushed GMOs in order to collect royalties from poor farmers, trapping them in debt they cannot repay. Monsanto promotes an agro-industrial model that contributes at least 50 percent of global anthropogenic greenhouse gas emissions. Monsanto is also largely responsible for the depletion of soil and water resources, species extinction and declining biodiversity, and the displacement of millions of small farmers worldwide.”

You can learn more here.