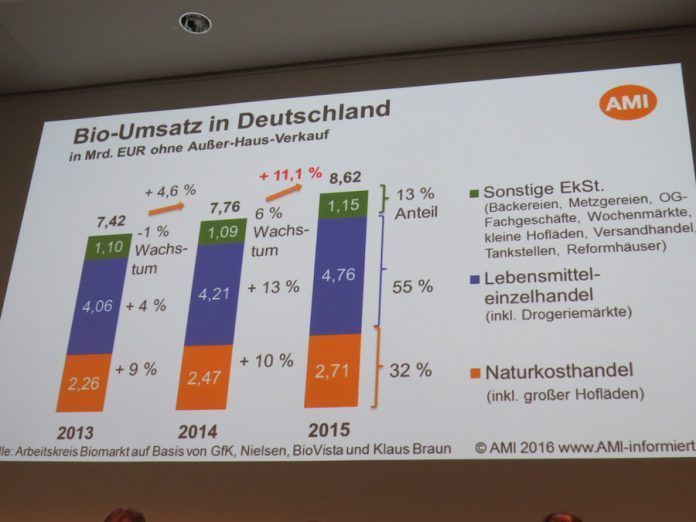 According to the calculation of the organic market working group, total turnover of organic food and beverages grew in 2015 by 11.1% to €8.62bn. The number of organic farms and the area of organically managed land also grew.

“Once again in 2015 demand grew more strongly than in previous years. More and more people are opting for organic food and are supporting the conversion of agriculture,” commented Peter Röhrig, the managing director of the Bund Ökologische Lebensmittelwirtschaft (BÖLW).

The analyses of the working group show that all sales channels contributed to market growth. The sale of organic food and beverages in the conventional retail food trade increased most strongly, where it rose by 13.2% to €4.76bn.

But the specialist wholefood trade (including non-food) experienced above-average growth compared with recent years and registered strong growth in turnover of 10% to €2.71bn. The other sales outlets like health food stores, bakers and mail order also saw a bigger increase in their sales in 2015 than before.

In total, the conventional retail food trade (including drug stores) expanded its market share by one percentage point to 55%. The specialist wholefood trade, including farm shops, had a market share of 31% and the figure for the other outlets (bakers, butchers, specialist fruit and vegetable shops, markets, box schemes, mail order, petrol stations) was 13%.

Around 30,000 more hectares of organic land in Germany

BÖLW stated that greater commitment to organic farming in many federal states and stable producer prices for organics led in 2015 to more farmers deciding to convert to organic cultivation. According to its estimates, organically managed land in Germany expanded in 2015 by around 30,000 ha to 1,077,950 ha. This represents a rise of 2.9%. The number of organic farms grew in the same period by 945 (4.0 %) to 24,343.

Nevertheless the development of organic farms and land area can’t keep pace with the strong growth of the market. Peter Röhrig: “The gap between organic turnover and the expansion of organic land area is getting bigger. This is why more organic products are being imported that could come from our own fields. Again in 2015, German agriculture didn’t exploit to the full the potential of the organic market.”

BÖLW chairman Felix Prinz zu Löwenstein appealed on this issue to Federal Minister Schmidt to ensure greater re-allocation of EU funds to the agri-environment programmes. This is necessary if German agriculture is to take advantage of the momentum in the market. “There is agreement at national and federal state level that organic agriculture should be rapidly expanded to 20% of agricultural land in order to strengthen rural regions and to make agriculture more compatible with the needs of the environment and animals.” He said Germany must now use the scope it has in EU farming politics to redeploy 15% of funds for general land payments in favour of agri-environment programmes. So far, only 4.5% are being redeployed.