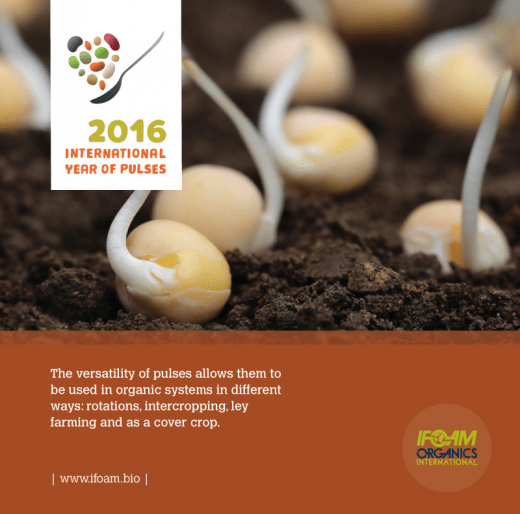 IFOAM is proud to be part of the International Year of Pulses (IYP) as it is an effective way to raise awareness of the nutritional benefits of pulses and the role they can play in food security and nutrition. IFOAM is also taking this as an opportunity to call on governments as well as donor and development agencies to develop programs and policies aimed at making crop rotations that include pulses, part of agricultural systems.

Pulses, a subgroup of legumes, are plant species members of the pea family that produce edible seeds, which are used for human and animal consumption.

IMPORTANCE OF PULSES IN ORGANIC AGRICULTURE

– Pulses, in symbiosis with certain types of bacteria (e.g. Rhizobium, Bradyrhizobium), are able to convert atmospheric nitrogen into nitrogen compounds that can be used by growing plants. It has been estimated that legumes, of which pulses are a subgroup, can fix between 72 and 350 kg of nitrogen per ha per year.

– Some species of pulses are able to free soil-bound phosphorous, which also plays an important role in the nutrition of plants and food we eat.

– Crop rotations play an important role in organic farming and rotations that include leguminous crops allow the continued future production on the same plot of land.

– Pulses in intercropping systems allow a higher underground utilization efficiency due to their root structures and, as intermediate plants, help weed control and protect from diseases and pests.

– The versatility of pulses allow them to be used in organic systems in different ways: rotations, intercropping, ley farming and as a cover crop

You can learn more in IFOAM’s Factsheet.