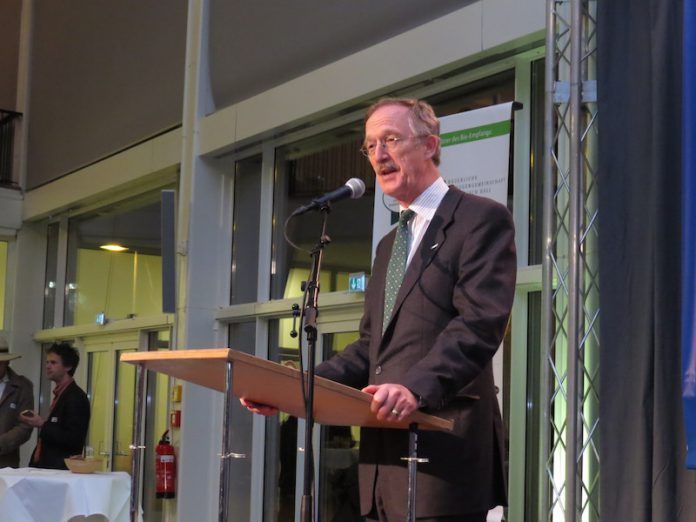 After two-and-a-half years of negotiations, one thing can be said about the planned new organic legislation:  it’s not yet ready. “Because of the obstructive approach of the EU Commission the ambitious Dutch leaders in the negotiations will not succeed in finishing the revision as planned by the time of the meeting of EU Ministers of Agriculture to be held on 27- 28 June in Luxembourg,“ says Felix Prinz zu Löwenstein, the chair of the Bund Ökologische Lebensmittelwirtschaft (BÖLW).

“We welcome the fact that the EU Parliament and member states are remaining steadfastly opposed to the nonsensical proposals of the EU Commission”.

Picture: Felix Prinz zu Löwenstein, BÖLW during a speech at IGW in Berlin

The new regulation must be better than the old one

However, given the current state of the negotiations, nothing tells us that the new organic legislation will be better than the current law,“ is how Löwenstein summarises the situation. He appeals to Minister of Agriculture Schmidt: “Ensure that only improved organic legislation is adopted. If there appears to be no prospect of this happening, the revision must be buried.“

Whether modern and proven process control is retained continues to be a controversial issue in the revision. “The EU Commission is still leading farmers and citizens by the nose. It wants to make organic farmers liable for the poison used by neighbouring farms and to weaken consumer protection in the case of organic products. At the end of the day, a regulation of this kind leads to less pesticide-free agriculture in Europe! If the EU Commission is serious about reducing pesticide contamination for our citizens it has to ensure there is  less agricultural poison in the environment by means increasing organic agriculture or, for example, banning glyphosate,“ Löwenstein maintained.

He went on to say that another reason why the negotiations in Brussels to establish a new Organic Regulation were not progressing was because of the attitude of the EU Commissioner for Agriculture Phil Hogan. BÖLW chairman Löwenstein claimed Hogan was manouvering the negotiations out of play. He said Hogan didn’t want to have organic farms certified. “Without certification fraud would be preprogrammed. Hogan is demonstrating that he has no interest in a positive development of organic in Europe,“ Löwenstein declares. He is very critical: “The behaviour of the Commissioner for Agriculture is totally unacceptable. Instead of moderating the trilogue, he is continuing to involve himself in the content and, with his new and inappropriate proposals, he is acting contrary to the EU Parliament and the member states. That is not the role assigned to the EU Commission in the Lisbon treaties. The rigid attitude of Hogan is preventing growth and employment in Europe and people being provided with local organic products that are increasingly in demand.“

No agreement in sight

Löwenstein called on Hogan (Picture) to smooth the path to a better organic law instead of constantly putting obstacles in the way. If, after the two years of negotiations, by the meeeting of the EU Ministers of Agriculture at the end of June no agreement on the basis of resolutions of the Council and Parliament has been reached, the EU Commissioner for Agriculture should stop the legislative procedure. “With the new demands of the Commission all hope of an Organic Regulation better than the prevailing one disappears. Over 300,000 organic enterprises in Europe need one thing above all else: legal security. Two years of fruitless negotiating show that legal security can only be achieved if the current organic legislation is taken further. We are ready to cooperate in continually developing the present EU Organic Regulation,“ says the  BÖLW chairman.

After negotiations lasting more than two years to devise a new organic law, when the Dutch presidency of the Council terminates at the end of June there will still be no outcome in sight.

There is no agreement on core issues.

On 27/28 June the meeting of EU Ministers of Agriculture will be held and the Dutch presidency will present a progress report on the results of negotiating the new EU organic legislation.

From 1 July the negotiations between the EU Parliament, Commission and member states will continue under the leadership of Slovakia.

Overview of contentious issues and points of agreement:

The introduction of special threshold values for organic products – we now speak of Action Levels as well – is vigorously defended by the Commission that keeps coming up with new proposals. Council and Parliament had fundamentally rejected this concept and they are in favour of improvements in dealing with infringements in general and of precautionary measures taken by companies.

Council and Parliament want  organic controls together with the rules governing how organic products are produced to be left in the organic legislation. The Commission wants them to be transferred to the general food control.

Still no agreement. BÖLW advocates locating production and control in one regulation in order to ensure more safety.

A controversial issue is the form organic controls should take (process or product controls, annual or less frequently, announced or unannounced) and how controls can be made more efficient and safer. The Commission would like to see a complete reorganisation of organic controls along the lines of the general food control system; Council and Parliament want to retain organic controls.

Still no agreement. BÖLW advocates annual controls, a national regulation of controls in the retail trade and also the strengthening of the proven and modern process controls.

Businesses should be subject to announced and unannounced controls.

A compromise seems to have been found: third countries can either make trade agreements with the EU with mutual recognition of goods as of equal value or producers in third countries must apply the EU Organic Regulation in all points. Adapting to particular characteristics of administration or system of law will not be possible.

The resolution is inadequate – it does not go sufficiently into the special requirements of third countries.

It has still not been decided whether detailed rules governing how organic food is produced and processed are to be negotiated now or in later legal acts. Just as unclear is according to what procedure they are in future to be decided.

Still no agreement. BÖLW advocates that, among other things, the rules governing poultry keeping should be postponed and subjected to robust revision at a later stage.