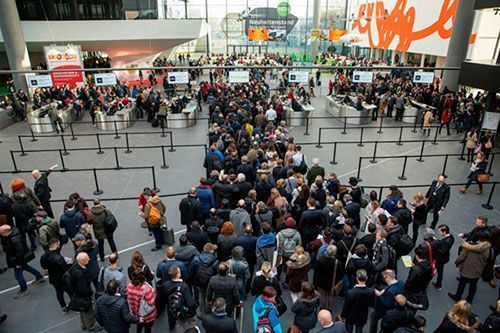 The exhibition duo BIOFACH, the World’s leading Trade Fair for Organic Food, and VIVANESS, the International Trade Fair for Natural Personal Care, have been able to set a new record in 2017 by achieving the 50,000 visitor mark.

This time, expert visitors travelled from 134 countries to the Nuremberg meeting place. They were enthusiastic about the offers from the 2,785 exhibitors (259 of these at the VIVANESS) from 88 countries, and were inspired by the country of the year, Germany.

The branch also drew a positive balance: in 2016, German households spent approximately 9.9% more money on organic foods and beverages than in the previous year. The turnover totalled EUR 9.48 billion, according to the Bund Ökologische Lebensmittelwirtschaft (Organic Food Production Alliance – BÖLW). An increasing number of customers are also buying natural cosmetics. The German natural cosmetics market is the strongest in Europe, with a market share of 8.5% and a volume of EUR 1.15 billion, according to the joint survey by konzepte, GfK, IRI, IMShealth and BioVista.

Petra Wolf, member of the NürnbergMesse Management: “After four successful exhibition days, we and the entire branch are delighted by the great atmosphere in the halls and the high-quality contacts. The country of the year Germany along with the STADTLANDBIO Congress provided a lot of inspiration in 2017, as did the diverse program offered in the region under the umbrella NÜRNBERG DIE BIOMETROPOLE (NUREMBERG THE METROPOLIS). We are already looking forward to the next issue of this exhibition duo, and to a reunion with all market players at the BIOFACH and VIVANESS 2018.”

“Enthusiastic exhibitors and visitors generated a colourful, international atmosphere in the aisles of the BIOFACH. The attendance of top representatives from politics, administration and diplomatic corps made the exhibition a central location for the debate on the future of ecological agriculture and nutrition. German organic entrepreneurs were able to display their innovative power and sustainability services in a very special way through their promotion of Germany as the country of the year”, said Dr. Felix Prinz zu Löwenstein, Chair of the Executive Board of the German top organic association, the Bund Ökologische Lebensmittelwirtschaft (BÖLW) in his positive summary.

The BIOFACH and VIVANESS 2018 are to take place from 14 February to 17 February in the exhibition centre Nuremberg.

First edition of Free From Food Dubai launched – the future of healthy & free from food products will meet in the UAE in...