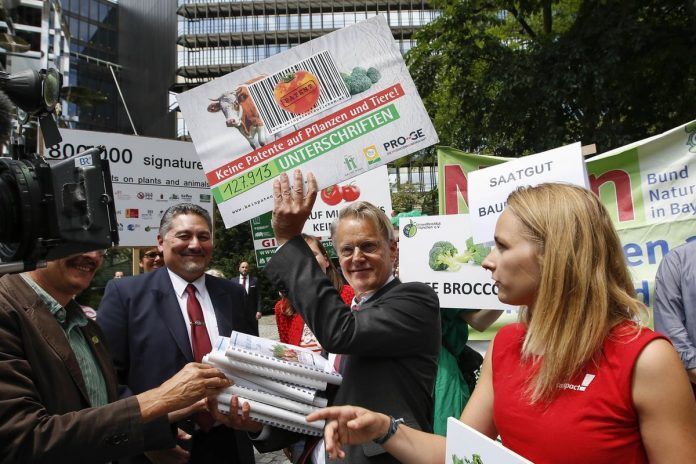 Coalition of No Patents on Seeds! demanding additional changes

29 May 2017 / After more than ten years of protest from civil society organisations, the Administrative Council of the European Patent Office (EPO) will meet just in one month´s time to strengthen the current prohibitions in patent law to exclude patents on plants (conventionally bred) and animals.

The proposal put forward by the EPO states that plants and animals derived from breeding processes of crossing and selection will no longer be regarded as patentable. One consequence of the change is that patents granted within the last few years, such as those on broccoli and tomato, would now be prohibited. Despite this success, the organisations behind No Patents on seeds! believe there is still a need for further changes.

“We welcome the planned strengthening of prohibitions in patent law but are nevertheless demanding that the loopholes are closed. This is the only way to achieve legal certainty for traditional breeders,” says Katherine Dolan from Arche Noah, Austria which is part of the international coalition of No Patents on Seeds! “We still need clarification that only processes of genetic engineering will be patentable, whilst conventional breeding is excluded from patent law. In the EPO´s current proposal, this clear distinction is still missing.”

The organisations behind the coalition No Patents on Seeds! are demanding that all conventional breeding is excluded from patentability and that patents are strictly confined to methods of genetic engineering. This demand is also supported in an EU Parliament resolution and in the wording of an official Notice of the EU Commission published in November 2016.

However, the proposal put forward by the EPO still includes far-reaching exemptions – for example, for random mutations – which would allow the EPO to continue granting patents and treating plants and animals as if they were inventions. In this respect, the proposal is not in line with the interpretation of patent law presented by the European Commission in November 2016, which stated that only methods of genetic engineering that directly intervene in the genome of plants or animals can be patented.

The patents claim random mutations in the barley, all barley plants with a specific quality in brewing as inventions, and extend to the brewing process and the beer. Civil society organisations in several European countries have started protests against these patents.

The meeting of the Administrative Council will take place at end of June and therefore the coalition of No Patents on Seeds! has sent a letter to the EPO demanding further discussions and amendments to the current proposal. In addition, the organisations are demanding access to the meeting. As yet, only representatives and the lobby organisation of patent attorneys will be allowed to attend this meeting as observers.

In the next couple of weeks important decisions are being made at the EPO. Raise your voice against patents on plants and animals! Write a letter to the governments and share the info on all channels! Thank you for your support!