The 12th European Organic Congress, organised by IFOAM EU and Bio Austria, has been a success beyond expectations. 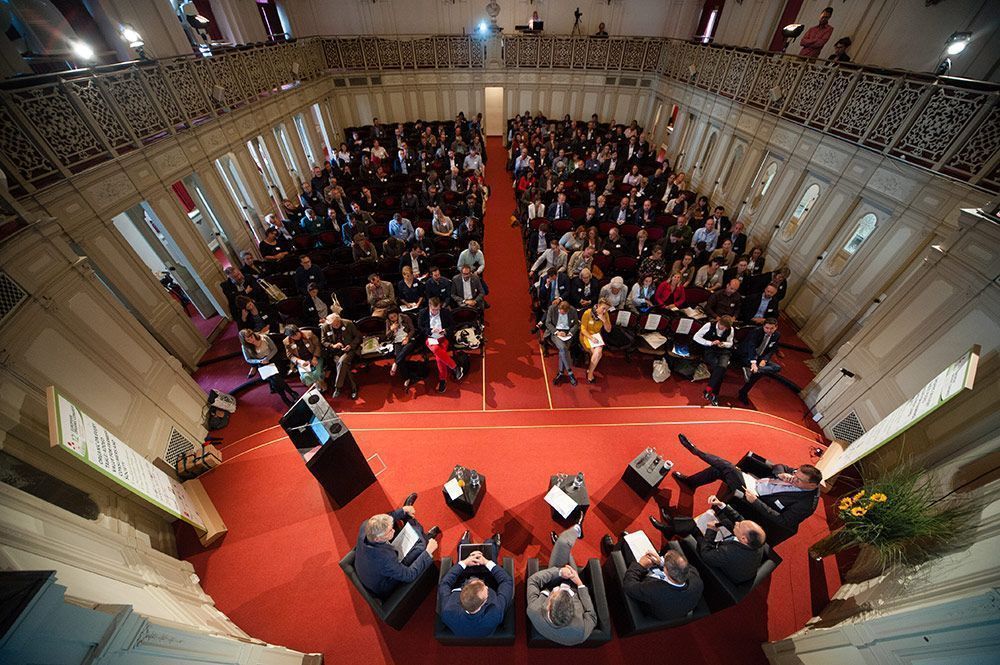 At midday on September 25, the President of BioAustria, Gertraud Grabmann, and the President of IFOAM EU, Jan Plagge, welcomed the attendees and inaugurated the Congress. Gertraud Grabmann highlighted the value that European policies are bringing to society by supporting the development of the organic sector. She said she was proud to be an organiser and host of the Congress and thanked IFOAM EU and the sponsoring companies.

Jan Plagge reminded the audience of the four basic principles of organic production, which have been the motto of this Congress: Health, Ecology, Equity and Care. He welcomed everyone but “especially those coming from the United Kingdom”, since the organic movement does not want to lose its British friends. He hoped we all can continue working together in Europe and sharing the same standards. He highlighted the rapid growth and dynamism of the sector, which are the soul of the organic movement. The challenge now is to continue growing within the limitations of sustainability. “In the free market no price is put on natural resources, but we must create a framework that accurately prices these resources, because they are limited.” And continued “This Congress is a good opportunity to share, to ask questions, to make Europe more organic.”

This was a plenary session on Fair Play and Fair Pay with Fabio Brescacin, CEO of NaturaSi, as keynote speaker, and the participation of Tomás Ignác Fénix, Vice President of the European Council of Young Farmers (JSCA); Gertraud Grabmann, President of Bio Austria; Oliver Sitar, Representative of the European Commission of the Agriculture and Rural Development Unit; and Sophie Tack, Member of the Fair Trade Defense Office. Eric Gall, Deputy Director and Policy Director of IFOAM EU, moderated the debate.

Fabio Brescacin, who owns 150 supermarkets and more than 500 stores of organic products in Italy, said that organic agriculture should not grow in the same way that conventional agriculture has been growing. The free market and the current economic system are not fair and if we want the food system to change, a new form of economic organization should be implemented. He pointed out that “the mission of organic is to work for the soil fertility and to face the environmental problems associated with livestock production.” He also stated that “it is essential that consumers are better informed as they are the ones who have the power to change the system. As organic producers and operators we must invest on transparency, strict standards and on a strict certification process, in order to maintain consumers trust.”

Oliver Sitar explained that member states can and should go beyond European regulations. Although potential solutions are currently being debated at the Parliament and at the Commission with the aim of reaching a political agreement by the end of the year, Sitar encouraged producers not to wait, but to join together and work together for a common goal.

Tomás Ignác Fénix suggested that because there are so few rules in Moravia, Moravian farmers should implement European standards, although this is not as easy for small farmers as it is for medium or large farmers. There are many small farmers who need help to optimize their farms. “The problem are unfair practices. There are specific rules about unfair practices but they should be applied consistently.”

Gertraud Grabmann stressed the need to educate consumers so that they understand the real value of food. “Bio Austria supports the proposals of the European Commission in terms of justice, so that dishonest practices are investigated.” She also corroborated austrian support to IFOAM.

Sophie Tack stated that concentration of power is damaging the food system. We need transparency, as well as respect for human rights and the environment. New laws and regulations should change the entire model. Consumers need to be better informed and understand that “seals are a tool, not the objective.” And added “There are many labels and it is difficult to know which ones are truly ethical … labels alone are not enough.” “Fair Trade means understanding the real price of each product”.

After a break in which we were offered excellent Austrian pastries we moved on to the second plenary session:

Organic on every table – The future of food and farming, a transformative approach for the next Common Agricultural Policy

This session was chaired by Thomas Fertl, Member of IFOAM EU and Head of Agricultural Policy and International Affairs of Bio Austria; and the following speakers participated:  Herbert Dorfmann, member of the European Parliament; Tassos Haniotis, Director of Strategy, Simplification and Political Analysis, Agriculture and Rural Development of the European Commission; Pekka Pesonen, General Secretary of Copa_Cogeca; Jan Plagge, President of IFOAM EU; and Josef Plank, General Secretary of the Austrian Federal Ministry of Sustainability and Tourism.

This 100% male panel highlighted the difficulties faced by the organic movement. There was some tension when Tassos Haniotis pointed that the organic movement is being naïve, highlighting that its power and influence are very limited. “The Common Agricultural Policy (CAP) is a system of subsidies, which means money, and therefore we should set realistic targets.”

Herbert Dorfmann put the focus on the role of politics in the development of organic farming and in encouraging young people to join organic agriculture and farming. He also brought up the issue of whether CAP subsidies to unhealthy products like sugar are reasonable. “So far we have talked a lot about public goods but not so much about public health.”

Pekka Pesonen wondered if regulations could be maintained in the future. “We need to simplify the rules and invest on technology in the organic sector”.

Jan Plagge explained IFOAM EU position and vision, pointing out that lobbying on governments is a necessary step if we want to see consistent changes from conventional to organic and sustainable production. “We do not believe in direct payments, it is the pressure and the planning that facilitate changes. Farmers are ready to change, but they need financial support to accomplish that goal. The current German legislation on agriculture and animal welfare works well and could be expanded to the rest of Europe.”

The Vice President of IFOAM EU, Jirí Lehejcek, closed the event. Next we enjoyed a dinner at the Garden Palace Schönborn, where we had the opportunity to chat in a relaxed atmosphere. Eduardo Cuoco, IFOAM EU’s Director, claimed in this pleasant ambient that: “We produce high quality food while delivering public goods to the society, so we are the innovators”. 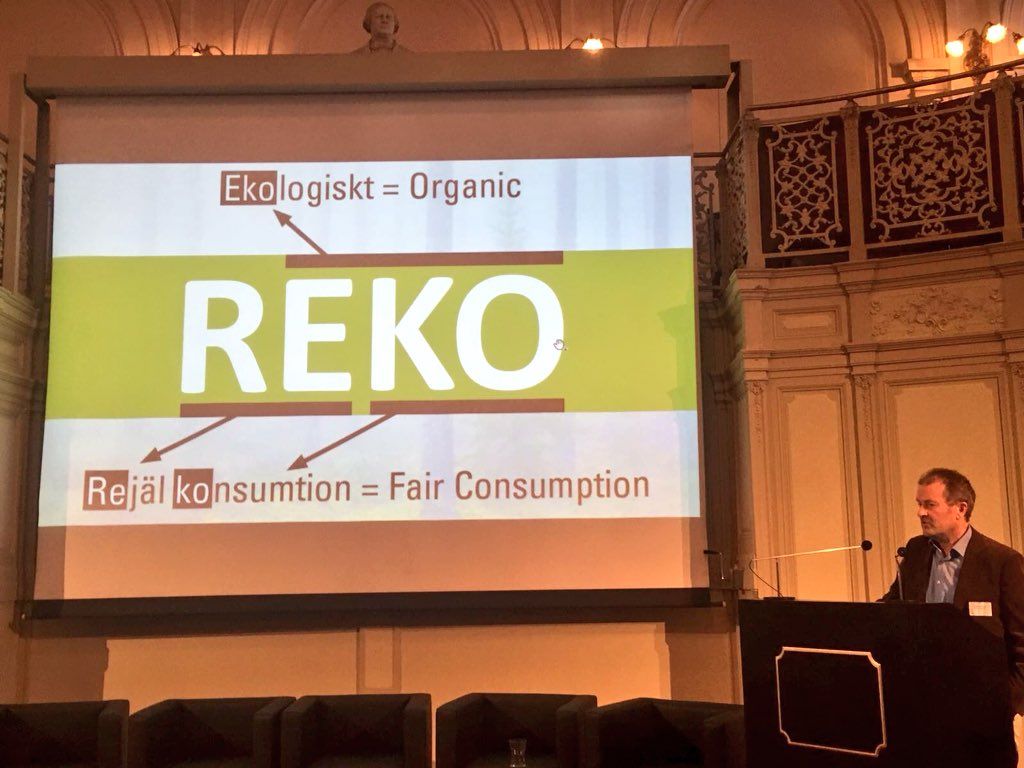 Thomas Snellman, a small Finnish farmer, was the first speaker the following day (September 26). He described a highly successful experience that he is coordinating: REKO Circle, which brings together producers and consumers in a direct sales platform. It went from having 15 producers, 400 members and a turnover of EUR 80,000 in its first year (2012) to 3,700 producers, 250,000 members and an annual turnover of EUR 30,000,000 in 2016. The estimated sales volume for this year is EUR 100,000,000. “What is the secret of this success? Most likely, participation is free.”

Organic regulations – The new production rules for plants and livestock: Needs of the sector

Emanuele Busacca, Regulation Manager of IFOAM EU, chaired this session. Christian R.Vogl, Professor of Natural Resources and Life Sciences at the University of Vienna (BOKU) was the main speaker. Other participants were: Marian Blom, Vice President of IFOAM EU; Sarah Compson, International Development Manager of the Soil Association; Karl Plsek, Deputy Head of the Division of Food Safety and Consumer Protection, Federal Ministry of Labor, Social Affairs, Health and Consumer Protection of Austria; and Nicolas Verlet, Head of the Organic Unit of Agriculture and Rural Development of the European Commission.

Christian Vogl highlighted the important contribution of the organic movement to the growth of the sector. He also reinforced his support for regulations. Mariam Blom stated that she did not like that the concept of fair trade had been left out of the organic regulation, and added: “it is also important to distinguish between the responsibility of the producer and that of the certification body”.

Sara Compson pointed that “transparency must be achieved in order to keep consumers trust. We must improve the organic sector and meet citizens’ expectations in relation to animal welfare and the fight against climate change.”

Nicolas Verlet explained which regulations regarding both animal welfare and the use of pesticides and other substances are being currently implemented, and which ones must be adopted by 2021.

This session was moderated by Nicolas de la Vega, Head of Policy for Agriculture and the CAP of IFOAM EU and included the participation of Faustine Bas-Defossez, from the Institute for European Environmental Policies (IEEP) and Laurent Moinet, Chairman of the Farmers Interest Group of IFOAM EU.

Jan Plagge‘s note in this workshop helps us to understand the point of view and action plan of the European organic movement within the complexity presented by the negotiations and the tug-of-war of the CAP. “Farmers must be supported so they are not afraid of change. Politicians want to avoid opposition if they transfer money from conventional to organic producers, but money belongs to the taxpayers and must be allocated to public goods, to things that benefit society, not to a model of agriculture that is the enemy of natural resources.”

Improving competitiveness in the organic production chain: a focus on the true calculation of costs

Gianluca Brunori, Professor at the University of Pisa, Adrian De Groot Ruiz, CEO of True Price and Inka Sachse, Director of the Soil & More Impacts development project, debated about the true cost of products, that is, the costs when water, soil, air and other limited goods are taken into account. They also discussed about the role of public institutions in making data available and open access; in ensuring transparency; in regulating sustainability complaints; in ensuring fair footprint methodologies; and in promoting effective communication with consumers.

After the break, the main conclusions of the two working groups were shared; conclusions and notes of the entire participants from the European organic movement were captured and also represented in an impressive handmade mural during the event.

Finally, the Congress closed with the debate on what role organic should play in the future.

The role of Organic in Future Economies: Up scaling vs. new economic approaches

With interesting statements and debate between big relevant players of the European organic sector, this pannel served – after two days of intense activity in the present – to look at the future and the ambitions of organic. We want to transform the world and in order to do so, organic production and philosophy give us many tools: a look at the organic horizon in 2030: the challenges of the organic movement can be reality if institutions, society and producers are involved and bet for change. #EUorganic2030 can be a reality; but only if we are all united.