Chemical residues found in food create a general tension between the coexistence of conventional agriculture and organic farming. This is the case of phosphonic acid (H3PO3), one of the most common ingredients in chemical fertilizers, phytosanitary products and pesticides, which is more frequently found in organic crops. This leads to a confusing question: how is it possible to find chemicals in organic fields?

It is a complicated story. Until a few years ago, the EU allowed the addition of phosphates to commercial products classified as ‘plant strengtheners’. In some countries, these substances could even be used in organic farming. However, these practices were banned in 2013, when inorganic phosphates were identified as pesticides. They were also added preventively to the baby food law as possible harm to the babies’ health. In spite of that, and unlike other chemicals such as glyphosate, phosphonic acid is not generally considered a threat to human health in a substantiated way.

Despite the veto, remains of phosphonic acid are still found in current organic fields. Phosphonic acid remains in the roots of perennial crops, including fruits, nuts and herbs, for at least seven years after having been converted to organic agricultural practices. Its presence on land could be also due to the use of some fertilizing products that are sold as fitting for organic agriculture, without writing phosphonic acid down on the ingredient declaration. Moreover, new theories point out that phosphonic acid might be formed in nature in certain climate circumstances.

Last autumn, OPTA and FiBL carried out a survey on phosphonic acid residues that provides good insight into the dimension of the problem. They did almost 4,000 residue analyses from the organic industry and found out that on average 50% contained remains of the substance. However, these findings were not sufficient to proceed with the decertification.

In fact, the phosphonic acid remains are considered immeasurable, so the products meet the organic quality expectations. According to the latest EFSA report on pesticide residues, 85% of analyses on organic doesn’t show quantifiable substances versus 56% of the analysis of conventional crops.

So why does this situation generate so much uncertainty among operators and certifiers?

“The burden of the widely used substances in conventional agriculture presses on organic and that is not a fair game. It has to stop”, Bavo van den Idsert, OPTA EU Association Manager said to Bio Eco Actual. The organisation considers the chemical drifts from conventional agriculture might threaten the aim of the European Commission to grow to 25% organic in 2030, as the ‘Farm to Fork’ strategy pursues.

To reach this goal, organic farmland has to grow with at least 10% each year from now on, OPTA points out. This will lead to a continuous number of conventional farmland converted to organic farming. Nevertheless, probably by then numerous organic farmers will continue to find chemical traces in their crops, due to the common use of phosphonic acid and its long permanence in the soil and roots.

To reach this goal, organic farmland has to grow with at least 10% each year from now on, OPTA points out

Several organisations have recently taken up some procedures to overcome the residue findings of phosphonic acid in organic crops. However, the different approaches are national guidelines which are not harmonized on EU-level.

Since it is a global problem, a joint response is necessary. So, OPTA has recently formed a working group to give advice for a harmonized approach. In particular, they propose the creation of a road-map to create a long-term progressive program to reduce phosphonic acid findings in organic crops from 2023, following an equivalent approach with chlorate, another controversial substance that caused problems in the agricultural sector.

Van den Idsert defends: “We think the roadmap approach is therefore technically possible, but it takes the whole food-sector to solve the problem with a systematic approach, based on data collection on both sides”. Therefore, OPTA considers it necessary to also involve the main actors of the conventional food industry in the action plan.

In this sense, the EU goal of reducing chemical pesticides to 50% by 2030 is fundamental. Not only to reduce the impact of conventional agriculture on the environment and human health, but also to prevent chemical and toxic substances from drifting towards organic crops.

The organic sector can’t stay residue-free in a polluted world”, says OPTA EU manager. “Phosphonic acid might be a good topic to show how conventional and organic sector can cooperate together to reduce the pressure of chemicals in food”, he adds.

However, organic cannot achieve the complete absence of toxic residues as long as pesticides are so widely used in conventional farming. 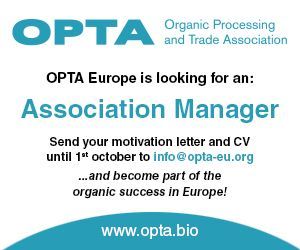