A new report by IFOAM Organics Europe highlights how much of the national CAP budgets will need to be dedicated to organic farming in all Member States to reach the EU Farm to Fork and Biodiversity Strategies’ average target of 25% organic land by 2030. 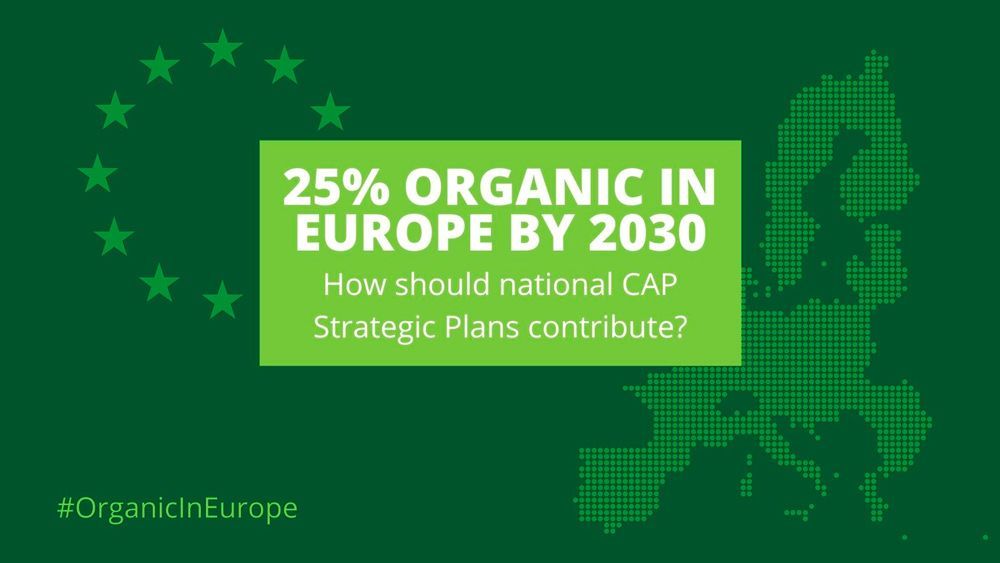 According to research IFOAM Organics Europe commissioned, the European Union should dedicate 3 to 5 times the current amount of CAP budget dedicated to conversion and maintenance of organic farming from 2023 onwards. Depending on their potential national target, baseline, and payments rates, in some cases, Member States should dedicate 10 times more national budget to organic support measures.

Jan Plagge, IFOAM Organics Europe’s President states: “Despite the disappointing deal on the CAP Strategic Plans Regulation, Member States still face a huge responsibility to ensure that the next CAP will address the collapse of our biodiversity and the climate crisis. Conventional farmers should be incentivised to transition to organic farming, and organic farmers should be properly rewarded for the public goods they deliver by producing quality food while protecting nature. Increased support to organic farming is a smart public policy tool to ensure that the next CAP will contribute to the Green Deal and to the Farm to Fork and Biodiversity strategies targets. Achieving 25% organic land in the EU by 2030 will only be achievable if Member States dedicate a much higher share of the CAP budget to organic conversion and maintenance compared to what is currently envisaged in most countries”.

Eric Gall, IFOAM Organics Europe’s Policy Manager and Deputy Director added: “The organic movement is concerned that, despite a clear EU target to triple the organic area in 10 years, several governments currently envisage to lower national payment rates to organic farming in their draft CAP Strategic Plans, or foresee clearly insufficient budgets to achieve their own ambition. With the new EU Organic Action Plan and the right policy incentives to increase both the production and demand for organic products, reaching the 25% target is achievable, provided Member States dedicate an adequate budget and payment rates to organic farmers in their CAP Strategic Plans”.

IFOAM Organics Europe presented the new study ‘Prospects & developments for organic in national CAP Strategic Plans‘, that visualises the efforts every country needs to put into place to reach their potential national targets, which should fairly contribute to the EU average 25% target.

In 2019, Europe had an organic land area of 9%, with average payments rates of €213.15/hectare. Only 64% of the certified organic area is currently receiving organic support payments, amounting to almost €2 million of CAP support/year (Note: Average payment rate, percentage of certified area supported, and total spend are 2018 data). 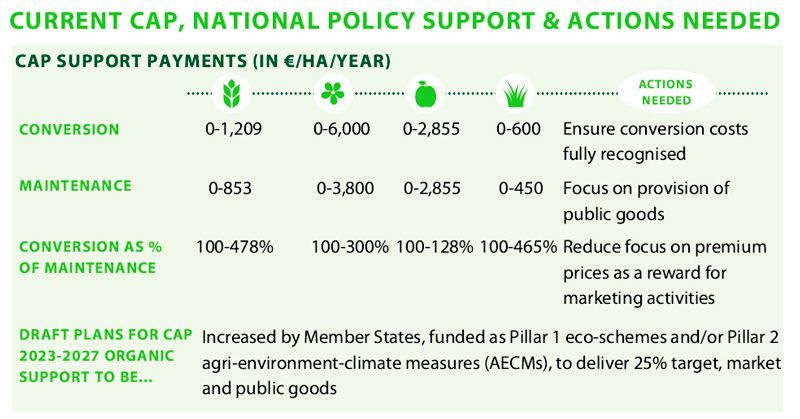 Achieving 25% organic land in the EU by 2030 would require Member States to:

According to IFOAM Organics Europe, Member States should introduce a national target for organic land in their CAP Strategic Plan, based on an analysis of the organic sector’s production needs, and of its contribution to the CAP, EU Green Deal, Farm to Fork and Biodiversity strategies’ objectives. The Commission should ensure that all CAP Strategic Plans include a target for organic land representing a fair contribution to the EU’s 25% target. Countries have different baselines and should have different targets, and Member States with already more than 25% organic land should also continue to develop organic farming. This is in line with the EU Organic Action Plan’s call for all Member States to set a target and national strategic plan for developing their organic sectors.