The European organic market continues to grow. In 2019, it increased by another 8 percent and reached €45.0 billion. Some markets enjoyed double-digit growth rates. 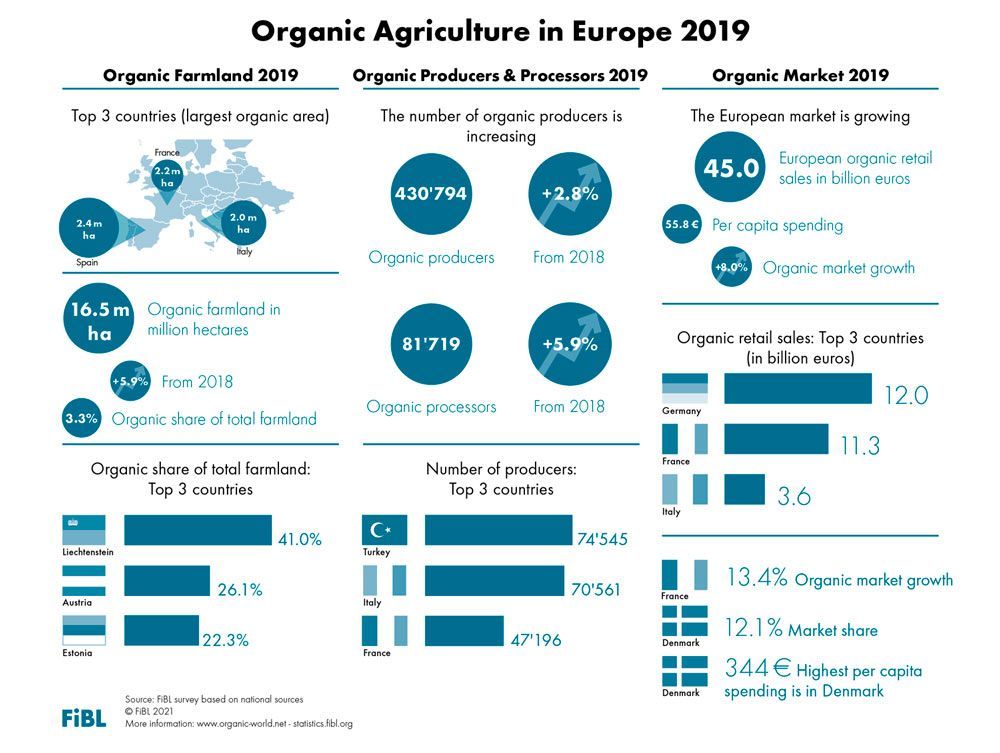 At this year’s digital edition of BIOFACH, the world’s leading trade fair for organic food, the Research Institute of Organic Agriculture FiBL, the Agricultural Market Information Company AMI and partners are presenting the data on the European organic sector (BIOFACH eSPECIAL, 17 February 2021, from 5 to 6 pm, Livestream 5). 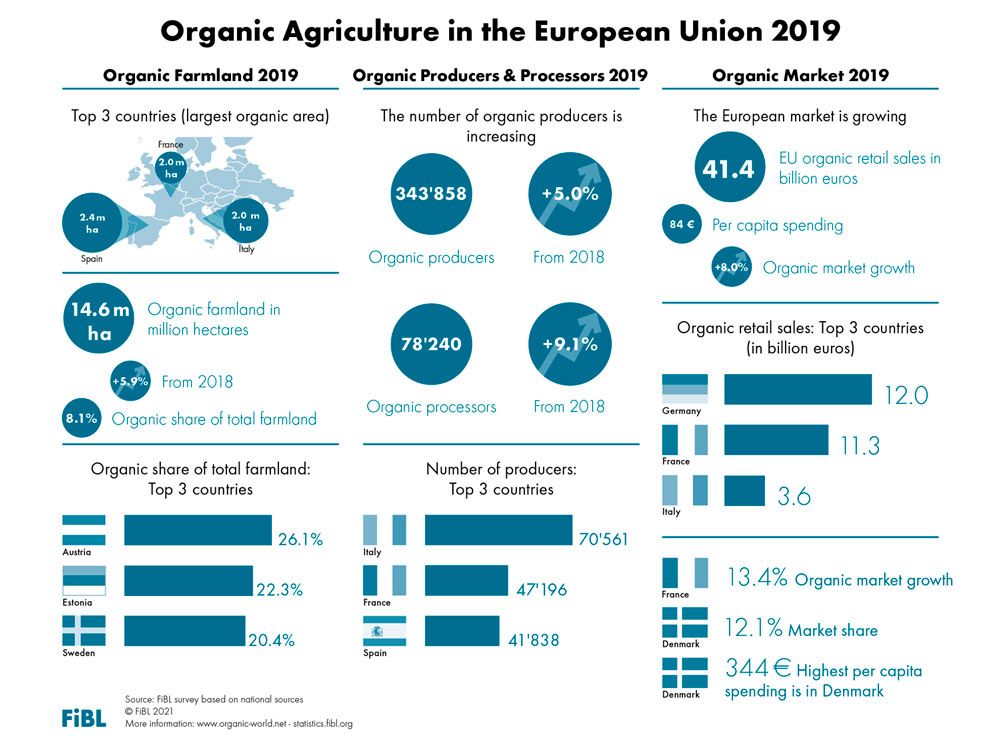 The organic farmland increased by over 0.9 million hectares in Europe

Organic producers on the rise

Continued growth of processors and importers

Retail sales in Europe were valued at €45.0 billion (€41.4 billion in the European Union). The largest market was Germany (€12.0 billion). The European Union represents the second largest single market for organic products in the world after the United States (€44.7 billion).

Steady growth of retail sales in 2019

The European market recorded a growth rate of 8.0%. Among the key markets, the highest growth was observed in France (13.4%). In the decade 2010-2019, the European and European Union markets’ value has more than doubled.

Denmark has the highest organic market share in the world

According to Helga Willer, responsible for data collection at FiBL, the numbers for 2019 show a promising growth of the organic area and market. “However, the organic area will have to continue to grow in the coming years in order to reach the European Commission’s goal of 25% organically farmed land by 2030”.

Eduardo Cuoco, Director at IFOAM Organics Europe, continued: “This data shows the European organic market’s potential to reach the objective of 25% organic land by 2030 put forward in the EU Biodiversity and Farm to Fork strategies. To reach this target the organic sector needs political support at all levels. This includes a good regulatory framework, adequate support under the CAP – with clear support for organic in the national strategic action plans – and a powerful European Organic Action Plan with concrete actions supporting conversion, market development and capacity building of the European organic sector. We will work closely with all the stakeholders to develop tools to measure and support organic growth”.

Diana Schaack, a market analyst at AMI, adds: “We are already looking forward to the consolidated market data for 2020. Last year the organic market in many countries exhibited accelerated growth due to the pandemic. If this trend sustains, production and processing have to keep pace. The Farm to Fork strategy of the European Union can support this development with respective measures”

FiBL and AMI conducted the survey on organic farming in Europe. The FiBL data collection was carried out in the framework of the global survey on organic farming supported by the Swiss State Secretariat for Economic Affairs (SECO), the International Trade Centre (ITC), the Coop Sustainability Fund, NürnbergMesse and IFOAM – Organics International.